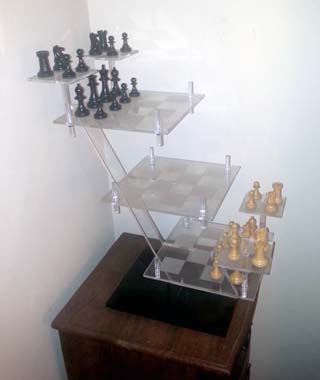 These rules are an elaboration of the rules printed in The Star Trek Star Fleet Technical Manual by Franz Joseph in 1975. With these rules I have attempted to lay out in precise detail how to play the game as I envisioned it. In creating these rules I have made every attempt to extend or wrap the classic game of chess around the beautiful multi-level Star Trek chess board and not to change Franz Joseph’s terse description of the rules.

In order to play chess on this board and for the game to still play somewhat like chess, certain characteristics of chess needed to be maintained and extended into a vertical dimension. For instance not only the ability for a piece to be situated above or below another piece, but to be able to use this position strategically. Adding a vertical dimension to a piece also required that the relative strengths of the pieces be perserved. This had to be balanced with keeping the game simple enough to play that there were no crazy moves that were difficult or impossible to visualize if they were valid or not.

Andrew Bartmess also put together a set of rules which he sells on his website. His rules are different. Though both his rules and these rules are based on Franz Joseph’s original text, they are not the same. Andrew’s rules were sold with a board manufactured by The Franklin Mint. His rules are copyright, I have not reproduced them here in whole or in part. I encourage you to visit his website for a copy of his rules (link at the bottom of the page).

The board, if viewed from the side, gives 2 overlapping paths on each file to the other end of the board. This allows pieces to pass over one another (kind of like 2 levels in a shopping mall). The attack boards (the small 2×2 boards) add extra room to the corners of a board which can be moved around during play. These are well needed real-estate seeing as the main boards are 4×4, things get crowded quite quickly. 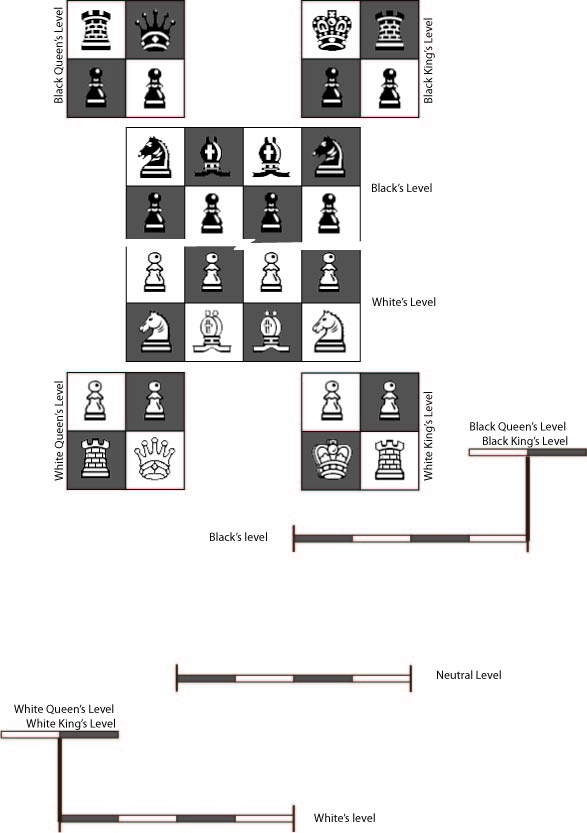 On any given level, pieces move as they do in regular chess. Moving up or down a level is similar to moving a square. Even though the color of the square does not alternate vertically, some pieces may move vertically, some must move to a different square in order to move up or down. This disparity allows the three dimensionality to be utliized to the fullest extent possible and retain the sense of classic game of chess.

Pieces which can move one or more squares at a time in a single direction (bishop, rook, and queen) can also move vertically in the same move.

When a piece changes levels, it may not return to or traverse that level in the same move.

A piece can only move in the direction it starts in. It cannot start moving in one direction upwards then reverse direction.

If there is a piece on the same level in front of a piece and a second piece on top of this piece, this situation does not block a piece from moving up in front of the piece above it (i.e. at an vertical angle). This is similar to horizontal situation where a bishop moving diagonally between two pieces.

The attack boards are extensions of the corner of the board where they are currently attached. Though they are physically close, you can not jump directly from white’s attack boards to the neutral board without passing through white’s level.

Arguably one of the more complex pieces to move even in classic chess. In general, a pawn can

On an unmoved attack board pawn’s first move: 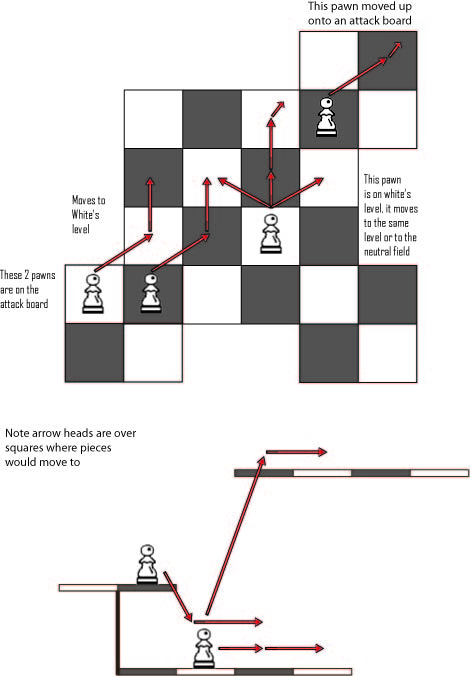 There are 4 files in tri-dimensional chess but each file is doubled vertically in space (except for the first and last 2 rows). This rule for the attack board pawns allows all 8 files (2×4) to be filled.

The rule for en passant from classic chess is also preserved from classic chess. An opposing pawn may capture a pawn left or right (not diagonally) if that pawn took the option to move two spaces forward on the previous move. However, if the pawn was moved off an attack board in front of an unmoved pawn, you cannot take this piece en-passant because the second pawn behind it blocks you, you could take the pawn behind it normally though. 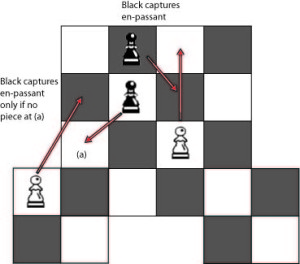 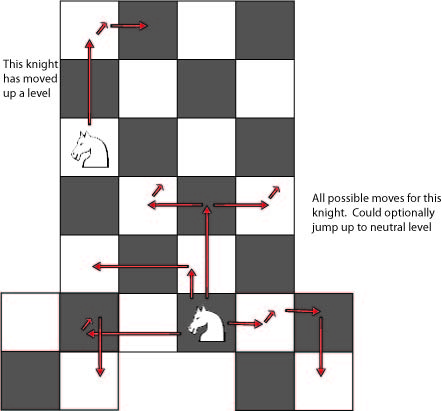 The knight travels exactly as it travels in classic chess, as in an L shape. However in tri-dimensional chess, this L shape is extended into the third dimension by allowing the kinght to move up or down one level or stay on the same level. It can jump over or through pieces. For example:

There must be board spaces (occupied or not) that the kinght travels over. The knight cannot traverse non existent board terrain. For example, a knight cannot move directly from the neutral level on to an attack board in its initial position because this implies moving through non contiguous board space.

The bishop always stays on the color it started on. As in regular chess, the bishop can move diagonally as many spaces as there are open in a straight line while ascending or descending. The bishop may also move vertically straight up or down. The bishop may move at an angle while ascending or all descending. All of these moves can be combined as long as there is an open path and it always travels on it’s color it started on and the move is one in one general direction as viewed from above.

It is possible for a bishop to be in a position vertically on top of (or below) a rook where the rook cannot take the bishop but the bishop can take the rook. 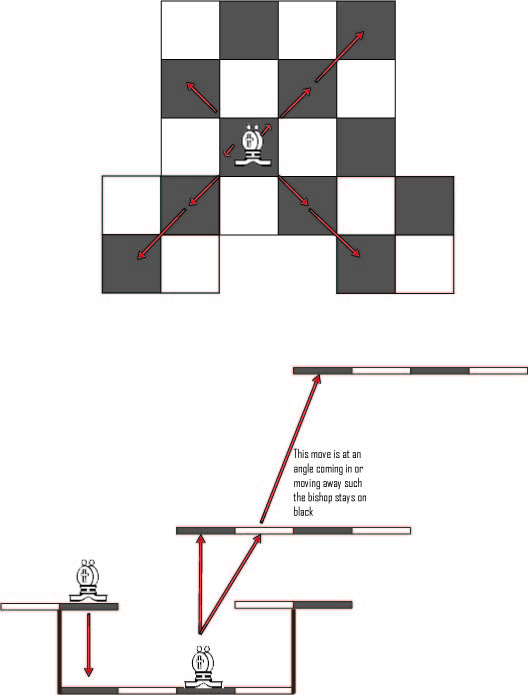 The rook always moves left, right, or forward or back in the ranks and files of the board. The rook may not move directly vertically, it must always move at least one space in horizontal space. The rook may move in one direction ascending or descending as long as there is an open path. 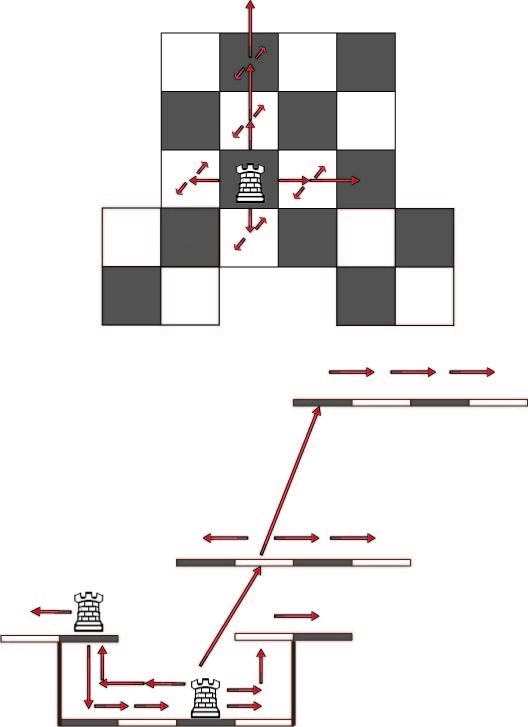 The queen’s moves are the combination of the bishop’s and the rook’s. It can move in any direction, both vertically or on the same level as long as there is an open path.

The attack boards are extensions of the corner they are attached to. They do not add an intervening level between two levels. To hop off an attack board, the piece must be moved to the main level to which the attack board is attached and then continue to move from there (if such a piece can move more than one space in a turn.

If an attack board is occupied by a single pawn, the owner of that pawn may move this attack board. Attack boards can be moved to an adjacent pin forward, back, left, or right (but not diagonally across) on the same level. They can be moved up or down to the next closest pin on the next level.

When a player moves on to an empty attack board, they have the option of inverting the attack board while it is empty.  Inverting an attack board on it’s own does not constitute a move and cannot be done on it’s own to avoid moving.

An attack board can be commandeered when the opponent moves a piece on to an empty board or captures the last remaining piece on the board.

Note that this will take 5 moves to invert an attack board and move it all the way to the far end of the board for a queen.  It also involves needing two pawns aiding one another to invert the board.

As in classic chess, the king and rook to castle must not have been moved.

The king may not castle out of, or into check.

There is a nice advantage to casteling because it gets both the king and rook off the attack board in one move allowing this attack board to move that much sooner. 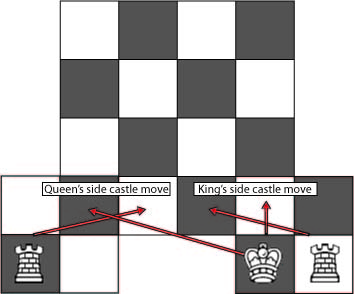 Those are the rules.  You do not need to read any further to play the game.

If you would like to read how I arrived at these rules and why I made the perhaps seemingly random choices (which were not in fact!), please read the Analysis page.

For a notation which can be used with this game, please see the Notation page.

Other Versions of the Rules

I am not the only person to have thought up rules for this board. Andrew Bartmess also has a different set of rules. Please see his website at yestercade.net. The rules I have detailed above are different from Andrew’s. He took a different set of assumptions than I did when he designed his rules. I encourage you to go get a copy of his rules and let me know which ones you like best!